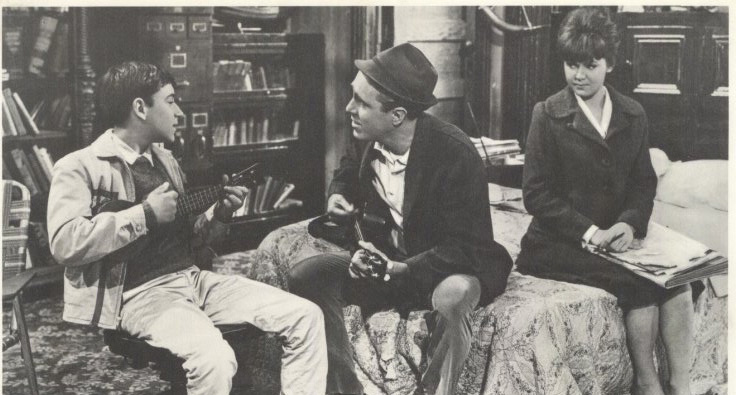 I would like to submit for your approval this little tribute to my all-time favorite movie, A Thousand Clowns, starring Jason Robards, Barbara Harris, and Barry Gordon (with Oscar-winning performance by Martin Balsam). This movie is an example of what distinguishes Humor from broad comedy — which is that a truly humorous piece will of course make you laugh, but with a small but essential tear in your eye, and your laughter slightly choked by the realization of some deep human truth that snuck up on you in the course of the story.

A Thousand Clowns is the story of Murray Burns (Jason Robards), a former kid-show comedy writer, and his 12-year old nephew Nick, a brilliant little guy whom Murray loves, but who may be taken away by the welfare board because they are concerned about the “unwholesome” environment he has provided for “the child”. Murray has been rebelling against the world for some time, but will soon have to choose between being true to his non-conformist soul, and going back to the rat race to keep his nephew Nick. I have always liked Nick, perhaps because he reminded me of my best friend when I was a little kid, a creative fellow whose name was Robbie Meyberg.

In a pivotal scene in the movie, Murray explains to his brother Arnie (Martin Balsam), why he quit the nine-to-five rat race, in a soliloquy that remains to this day my personal anthem:

I’ve gotta know what day it is. I gotta know what’s the name of the game and what the rules are without anyone else telling me. You gotta own your own days and name ’em, each one of ’em, every one of ’em, or else the years go right by and none of them belong to you. And that ain’t just for weekends, kiddo.

There is not much more I can tell you. All I can suggest is that you see the old 1965 black-and-white movie.

I have always been haunted by the opening song, titled “A Thousand Clowns”. It was sung by Herb Gardner’s then-wife Rita Gardner (fantastic singer, from the original cast of The Fantasticks), with lyrics by Judy Holliday.  Only the first stanza ever made it into the final movie, and with the slight change of the lyric to “If I can make you laugh” added a poignant yearning that wasn’t in the original words, but fitting to the mood of the film. It was only this past week that I learned that Judy Holliday passed away before the film was released, so those ten seconds of music turned out to be her last words heard by the world.

Now that’s what I call Humor. Here is Holliday’s complete song, along with the clip at the beginning of the movie where Rita Gardner sings. I dare you not to cry.